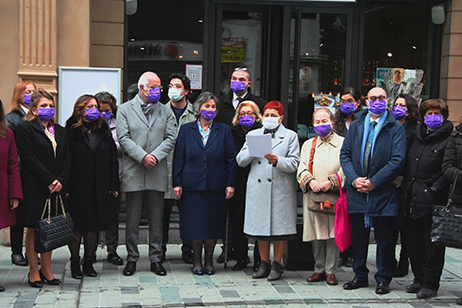 Equality between men and women is the fundamental principle of democracy.

March 8 symbolizes the struggle of working women in order to get their rights, during which they lost their lives.

Today, although women have equal rights under national legislation and international conventions, they face with multiple obstacles in exercising their rights due to the pressure of the male-dominant mindset.

Therefore, March 8 is not a day to celebrate, but a day to voice out the problems women are facing with and the solution proposals to these problems and to stand against all sorts of discrimination and violence.

As Istanbul Bar Association Women’s Rights Center and Istanbul Union of Women’s Organizations, drawing attention to the fact that the vast majority of women, who make up the half of the total population, suffer discrimination in the family and social life, and that, as of 2021, more than one million eight hundred thousand women are illiterate in Turkey, we demand;

A decisive EDUCATION policy based on gender equality to be implemented as education has been the most fundamental problem of women,
Education to be based on secular scientific grounds in order to raise free individuals,
Termination of all sorts of violence, primarily domestic violence, in our country where one out of three women is subject to violence and at least one femicide is committed every day, and the increase in the number of women’s shelters,
Prevention of child marriages and implementation of marriage age regulated under law,
Increase in the number of the women MP’s as the rate of women is only 3% in local authorities and it is 17% in the Turkish Grand National Assembly, which means inadequate representation in politics,
We demand that no retrogress shall be allowed in the rights granted to Turkish women thanks to the principles and revolutions of Atatürk.

As Istanbul Bar Association Women’s Rights Center and Istanbul Union of Women’s Organizations, we re-emphasize on this March 8 once again that attainment of gender equality in every single aspect of life, primarily in education, needs a decisive equality policy run by the state. We demand that Ministry of Equality and Women should be established urgently.