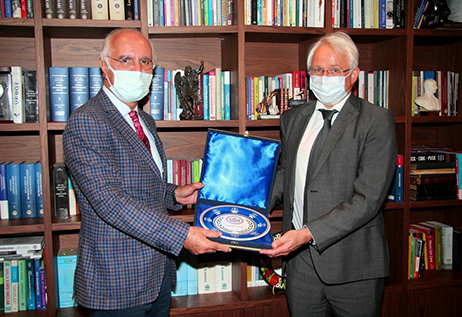 Regenbrecht, who took office as the German Consul General in Istanbul in September, thanked President Durakoğlu by stating that Istanbul Bar Association and the Consulate have always had a good dialogue in the context of both delegation visits and the projects carried out with lawyers and that they hope this dialogue and solidarity will strengthen in his term of office.  President Durakoğlu stated that Turkey and Germany have always been in a special relationship and they hope that existing good relations between these institutions will continue within the framework of mutual understanding and brotherhood. Durakoğlu highlighted on the importance of the contribution and support of Germany, which currently holds the term presidency of the EU for the opening of Chapters 23 and 24, which are related to the judiciary, in Turkey’s negotiations with the EU, in order to return Turkey to its former position in the process.  Underlining that Turkey, where judicial reforms were being discussed till 2007, has been dragged into an environment in which these reforms are far from being a subject for discussion as Turkey-EU relations has come to a standstill, Durakoğlu remarked that re-opening of the negotiation process as it was before 2007 is important and urgently needed in order to oblige the Turkish government to make judicial reforms. President Durakoğlu indicated that Turkish people are expecting structural reforms in the field of judiciary contrary to the government’s will and any possible contribution and support by Germany in order to restart the negotiations for Turkey means something special for the actualization of the people’s will in Turkey and for democratization. Underlining the necessity for Germany and the EU to understand that the citizens, NGO’s and the civil society in Turkey have a serious and strong commitment and an advanced level of awareness in order for the structural reforms in the judiciary to be made, Durakoğlu said that this will and commitment could force the government to make structural reforms and he pointed out the need to open these chapters as a method of this. Emphasizing that important legislative amendments were enacted in order to comply with the acquis during the periods when the negotiation processes were open, Durakoğlu stated that when the process was closed, problems arise in the implementation and the amendments fell far apart from the ideal.

Responding to the questions addressed by the Consul General Regenbrecht on the multiple bar association system recently introduced in Turkey,  President Durakoğlu indicated that all of the 80 bar associations in Turkey were against this multiple bar association system against which they made demonstrations, but a second bar association [in Istanbul] was established with a politicized perception and many irregularities.  Durakoğlu went on saying “In this period when the belief in the rule of law has decreased, there is an attempt to atomize the bar associations in Turkey.  Bar associations will continue with their struggle, which is their one and only instrument. Within this context, international solidarity befitting democracy is also important. Bar associations need a more effective position at the point of changing the will of the government. Istanbul Bar Association is the most effective in democratic mass organization, NGO, in Turkey and it has a very powerful voice . Our struggle an efficient organization would mean a lot for our future.  We will not accept the instrumentalization of the bar associations, we will go on with our struggle".  President Durakoğlu emphasized that Turkey has become authoritarian and the legal profession and the bar associations were no exception to this as they received their shares from this authoritarianism , and he expressed that authoritarianism can be stopped to the extent that Turkey keeps its position as a state governed by the rule of law.

Regenbrecht, the Consul General of Germany in Istanbul, stated that they are open to all kinds of cooperation, dialogue and solidarity within the limits of their authority in order to put the Brussels-Ankara line on its track.