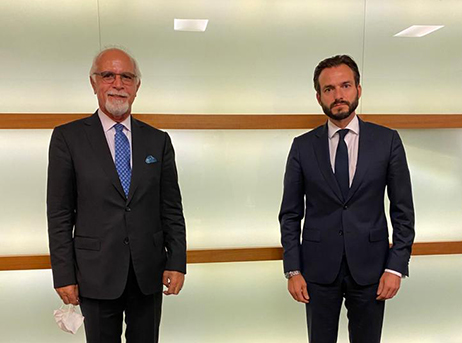 President of the European Court of Human Rights (ECtHR) Robert Spano had a meeting with the President of the Istanbul Bar Association Atty. Mehmet Durakoğlu within the framework of his visit to Turkey on September 4, 2020. ECtHR Deputy Registrar Hasan Bakırcı and Istanbul Bar Association Human Rights Center Chair Atty. Tuğçe Duygu Köksal also participated in this very meeting.

At the meeting, President Durakoğlu first mentioned the activities of the bar associations for the protection and development of the state governed by the rule of law and human rights in accordance with the Turkish Attorneyship Code. Within this framework, Durakoğlu also touched upon the certain aspects of various provisions of the Turkish Attorneyship Code numbered  7249 which includes changes in the structure of bar associations and enabled transion to multiple bar association system in Turkey and the Law on Amendments to Certain Laws, which was published in the Official Gazette on 15 July 2020 that are contrary to the Turkish Constitution, Article 2 of the Constitution regulating the state governed by the rule of law in the first place. President Durakoğlu highlighted the problems faced by lawyers, who have a key role in the judicial system, in trials within the framework of restrictions on the right to defense, as well as the importance of the principle of not identifying lawyers with their clients, and drew attention to issues related to defense, liberty and security rights, such as the unjustified and ineffective examination of appeals against detention measures.

The President of the ECHR, Robert Spano, did not give an opinion on this issue at this stage, as the amendment to the law on the structure of bar associations was pending before the Constitutional Court. However, President Spano emphasized the fundamental role of lawyers in the judicial system within the framework of Conventional principles and underlined that the restrictions, that can only be imposed exceptionally, on the right of defense and related guarantees, are one of the main issues dealt with in the Convention. Likewise, he stated that the reasoning of the decisions regarding the detention order was one of the core guarantees and stated that the interpretation of the domestic law on the right to liberty and security was not only of the domestic courts, but also that the control was strictly carried out by the ECtHR. Lastly, President Spano emphasized that local courts have to apply the case law of the Constitutional Court and the European Court of Human Rights, and drew attention to the necessity of fulfilling the requirements of the national courts in terms of individual measures included in the finalized ECtHR decisions and those by the national courts have to comply with the decisions of the ECtHR.