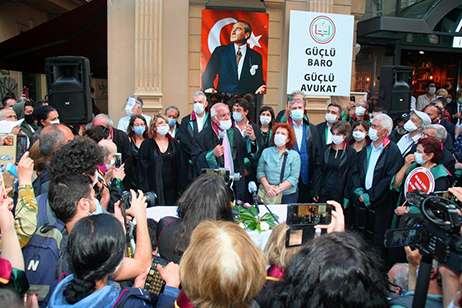 After the Presidency of Turkey announced that preparations were made to change the structure and electoral system of the bar associations, the first phase of the 'Action Process', which was initiated after all the bar associations' warnings and requests were left unanswered, ended in Anıtkabir. The Presidents of Bar Associations stood in homage for Atatürk and returned to their cities.

While we were trying to make Turkey a state governed by the rule of law, we went to Ankara to see that Turkey is nothing more than a police state. As the presidents of 47 bar associations in Turkey, we set off on Friday, June 19 at 10:00. When we started marching, we were accompanied by 22 security guards. I set out with 22 security guards from Kartal. I thank all of them.

Despite the weather conditions, we marched. As previously planned, we met with other bar presidents at our meeting point on the road of Eskişehir, 20 kilometers before Ankara. However, we were stopped by the police 300 meters before the members of Ankara Bar Association were waiting for us.

Despite the explicit provision of the Constitution, despite the laws, and the rulings of both the Constitutional Court and the European Court of Human Rights, they tried to tell us the law on meetings and demonstrations. However, they were not able find an answer to the question "why cannot we walk?". Whatever it was that hindered our march, then do something. Can you think of such a sense of security, such a police force? No such security approach is observed in any place in Turkey.  It almost became the center of a police state. I said bluntly. I am the president of a bar association, you are taking an illegal act. After encountering such an unlawful process, do not expect us to say "If you have considered it as appropriate, we shall go back”. No matter how long it will last, it could be three months, six months or a year, we cannot go back. I cannot return to Istanbul under these conditions, I cannot look at the face of my colleagues. I think everyone should know that defense cannot be silenced. It should be known that lawyers cannot be taken over. It should be known that lawyers will not obey.

We spoke with them again. We gave them time until 14.00. We told them that if they are still negative in their attitude, we will make a call to all lawyers in Turkey to gather at that area. We said that it is pointless that you try to make us give up our idea by putting some inhibitions and tiring us.

The police barrier was removed within the time limits. We met our colleagues from Ankara and we got Anıtkabir no time flat.

We are going through a very difficult period. They captured two of the three pillars of the judiciary. They also want to take over and defend the third constituent of the defense. They see the judiciary as part of their strategy. Imagine, look, they are trying to develop everything over the judiciary. If they get us, the judiciary will come to an end,  the law will be left aside. We are here to make this country a state governed by the rule of law. Our reason for existence is to have judicial independence in this country. Without judicial independence, it is not possible for the lawyers to practice as a lawyer. As we always say; we are lawyers and we will be needed by everyone one day.