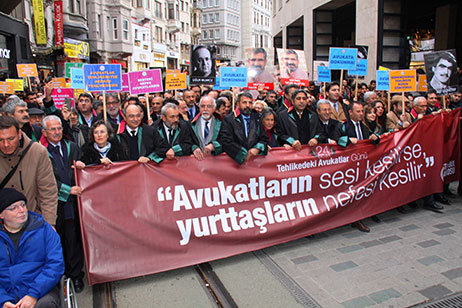 DAY OF THE ENDANGERED LAWYER

On January 24, 1977, five lawyers were murdered by Franco supporters in Madrid. January 24 has been chosen to be the “Day of the Endangered Lawyer” while it is dedicated to a different country every year. On Thursday, January 24, 2019, which is dedicated Turkey this year, we came together with our colleagues in order to resist against any threat towards the legal profession in Galatasaray Square and we marched to Istanbul Bar Association where President of Istanbul Durakoğlu addressed to the lawyers. In his address, Durakoğlu referred to the background of the Day of the Endangered Lawyer. President Durakoğlu went on saying:

“Today is rightfully dedicated to Turkey. Turkey has never experienced such a period of time in which lawyers are endangered to such an extent. We have been the primary target of the state of emergency rule that follows the already-severe period we have been going through as lawyers. We have been threatened, battered, taken out of courtrooms, we have been detained, we have been murdered, each one of us being Tahir Elçi. On that very day, we have lost one of the trivet of judiciary.

“Don’t forget us, my people!” said Uğur Mumcu. He was murdered by dark forces on January 24 in 1993. We remember him, our colleague, with respect.

Yes, my people, don’t forget us! Our struggle is not only for money. Undoubtedly, we are struggling to earn a living. However, our profession is not limited to that. Ours is inherently a struggle for democracy… It is for your right to legal remedies... It is for justice, which we can never forsake… It is the state governed by the rule of law for which we struggle... It is for you to live humanely, which is only possible through an independent judiciary… It is to achieve a society based on human rights... We suffer in order for you to have legal security... If we are in danger, it is only for you… Don’t forget us...

We announce to the world that we will never bow to oppression. We will not be intimidated by any threat. We will not cower. We will always look out for democracy and human rights under the guidance of the stories which we grow up with. We will always keep our inherent determination for struggle alive. Because we know it for sure: Lawyers are breath in voice, but if we remain voiceless, citizens will remain breathless. We will never remain voiceless, we are lawyers. We are lawyers and anyone will need us one day.”