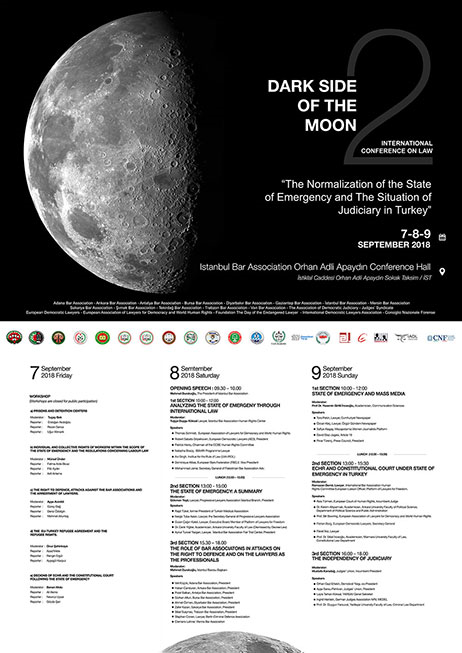 INTERNATIONAL CONFERENCE: DARK SIDE OF THE MOON

The first day of the conference was dedicated to 5 separate workshops. Prisons and detention centers, individual and collective rights of workers  within the scope of the state of emergency and the regulations concerning labour law, the right to defence, attacks against the bar associations and the arrestment of lawyers, the EU-Turkey Refugee Agreement and the Refugge Rights, Decisions of ECHR and the Constitutional Court following the state of emergency were the topics discussed during these workshops.

International Conference on Law “The Normalization of the State of Emergency and the Situation of Judiciary in Turkey” was realized with the contributions of İstanbul, Adana, Ankara, Antalya, Bursa, Diyarbakır, Gaziantep, Mersin, Sakarya, Şırnak, Tekirdağ, Trabzon and Van Bar Associations along with The Association of Democratic Judiciary, Judges’ Syndicate, European Democratic Lawyers – AED, European Association of Lawyers for Democracy and World Human Rights- ELDH, Foundation The Day of the Endangered Lawyer, International Democratic Lawyers Association – IADL, Consiglio Nazionale Forense.

The conference was given a start with the opening remarks of Attorney-at-Law Mehmet Durakoğlu, President of Istanbul Bar Association. Indicating that the legal world in Turkey has been going through the most depressive period in the history of Turkish Republic, Durakoğlu referred to the  state of emergency (SoE) declared after the failed coup attempt of July 17 and said that SoE has been misused in order to intimidate the opposition and to change the regime in Turkey.

Durakoğlu detailed on the restrictions imposed on lawyers in their meeting with the suspect/defendant, which disproportionally hampers access to lawyer, in other words, access to justice. He emphasized that it has become almost impossible to practise legal profession in Turkey.

Durakoğlu explained that some rights have been suspended due to SoE in accordance with Article 15 of the European Convention on Human Rights, and that Constitutional Court does not monitor the compliance of governmental decrees with law. He also expressed that law can never be suspended.

“We have to follow in the footsteps of the reality taught to us by our history in order to achieve a state governed by the rule of law and independence of the judiciary in Turkey. This has only means: Struggle. We have to give this struggle. This conference is a part of this struggle. We are trying to enlighten the dark side of the moon and we are doing our best to achieve this” said President Durakoğlu.

The conference went on for 2 days with the sessions on;

“ANALYZING THE STATE OF EMERGENY THROUGH INTERNATIONAL LAW”

“THE STATE OF EMERGENCY: A SUMMARY”

“ECHR AND CONSTITUTIONAL COURT UNDER STATE OF EMERGENCY IN TURKEY”

“THE INDEPENDENCE OF JUDICIARY”