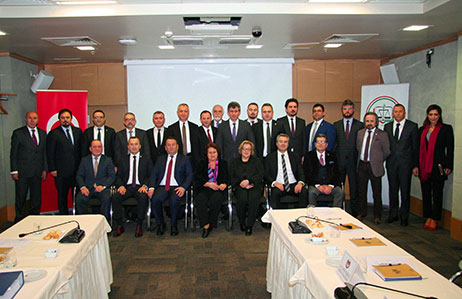 Istanbul Bar Association hosted the Enlarged Meeting of the Presidents of Marmara and Aegean Bar Associations in Istanbul on Saturday, January 28, 2017.

In his opening address, President of Istanbul Bar Association Atty.  Mehmet Durakoğlu rendered information about the agenda of the meeting.

The meeting was attended by the President of the Union of Turkish Bar Associations (UTBA) Atty.  Prof. Metin Feyzioğlu, 14 bar presidents and representatives of 2 bar associations. Vice-President of Istanbul Bar Association Atty.  Necmi Şimşek, Secretary-General Atty.  Cengiz Yaka, Treasurer Atty.  Aydeniz Alisbah Tuskan and Board Members Atty.  Şahin Erol and Atty.  Hasan Kılıç.
A final declaration came out as a result of the meeting.
We, as the Bar Presidents who have attended the Enlarged Meeting of Marmara and Aegean Bar Presidents, publicly announce our opinions concerning the constitutional amendment package.

As bar associations, whose authority is based on the Constitution and whose duty is to defend human rights, we are aware that this constitutional amendment package does not offer any solution to the primary problems of our people while it would also abolish the parliamantary democracy as it introduces unity of powers.
With the annulment of the separation of powers, “freedom” would be vanished, “constitution” would be vanished.

Constitution is out of the question within a society where the rights are not guaranteed and there is no separation of powers.

With the decision issued by the constitutional court that is “not to monitor the statutory decrees”, state of emergency has been converted into a totally arbitrary management of statutory decrees. We are well aware that it is not possible to make a legitimate and democratic charter debate while this situation prevails.

It is something favourable to grant the right to stand for election to the youth at the age of 18. However, it is clear that the youth would not be positioned in the parliament with the new regulation as their current representation in the Assembly can be counted on the fingers of one hand although the Contitution, as it stands, grants the young people at the age of 25 with the right to be elected.

What is aimed is;

-    A change in regime, not a constitutional amendment, for democratization.
-    An attempt to surrender our country and its people’s rights and freedoms to one person. Even if this one person would be the most democratic person in the world, it is explicit that s/he will be transformed into a dictator with such an authority and irresponsibility.
-    It is an attempt to abolish the parliamentary democratic system.
-    It is an attack towards the founding values of the Republic.
-    It destroys the separation of powers.
-    It collects not only executive power, but also legislative and judicial powers in one hand.

This constitutional amendment would annul our national unity, which would lead to emotional and actual division. We would face the danger that our country would be divided into states.

We do not remain silent to this amendment bill which would lead the way to surrender our country and nation to the will and mercy of one person.